If you are over 50, you surely remember him. How could you not? Certainly you remember his signature song: “Tip Toe Through the Tulips”.

Yes, we’re talking about Tiny Tim, that tall, long, stringy haired, goofy looking dude playing the ukulele and singing in that quivering, falsetto voice.  He was silly, campy and probably did more for ensuring that the ukulele would become one of the more derided instruments of the past half-century.

But what goes ‘round, comes ‘round because the ukulele is back! And it’s hot! Ukulele music festivals are popping up all over the country.  Even Eddie Vedder recorded an entire album of ukulele songs and won a Grammy for it. Over 1.7 million ukes were sold in 2017, up from 500,000 in 2009.

Tiny Tim, as it turns out, was an American musical visionary.

The ukulele originated in Europe and was introduced to Hawaii in 1879 when a Portuguese immigrant named Joao Fernandez jumped off a boat and started singing and strumming his Branguinha. Legend has it that the Hawaiians were so impressed with his playing that they called the instrument “ukulele” which translates to “jumping flea.” The instrument quickly captured the imagination of the islands to where the reigning monarch Kalakaua learned how to play it. By the 1920’s Sears Roebuck catalogues offered ukes for a couple of dollars. Big name performers such as Bing Crosby, Betty Grable and Elvis Pressley incorporated the uke into their acts.

But by the 1950’s rock-n-roll was sweeping the country and the tinny, toy-like uke was swamped by kids who fell in love with the electric guitar. 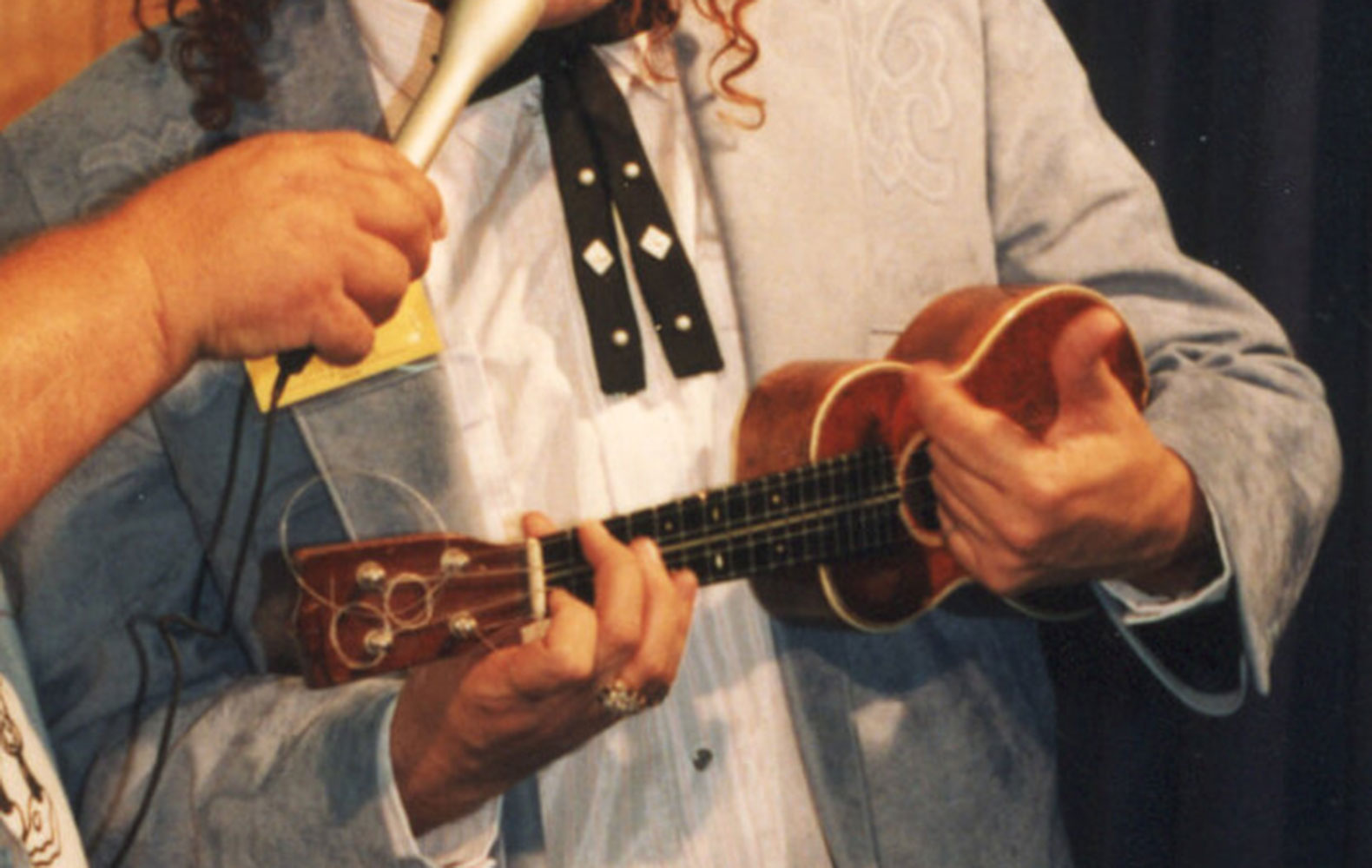 Tiny Tim, however, kept playing it, appearing on television shows like Ed Sullivan. But the image of Tiny Tim and the toy-like ukulele was no match for the electric guitar driven act like the Beatles, Jimi Hendrix, Rolling Stones and Chuck Berry.

Beginning in the 1980’s some rock stars such as Paul McCartney began to play it. McCartney was influenced by George Harrison who was a devotee of the instrument. And slowly, the ukulele began to make a comeback, despite the fact the most common image of the instrument was still associated with Tiny Tim.  For a wonderful account of the uke’s history and evolution, (and the main source of the research for this paper), check out “The Rise and Fall (and Rise) of the Ukulele” by Marion Jacobson in the January 24, 2015 edition of The Atlantic.

Clearly, there is a major ukulele uprising taking place in the US, not only as evidenced by the exploding sales numbers, but I have been exposed to the rise (again) of the uke through my work with Music For Everyone. Other than my memories of Tiny Tim, I had no idea of the resurgence of the uke until a few years ago when we began receiving requests from schools to provide them with the instruments to start school based uke programs. MFE, through its annual instrument grant program, has been awarding grants to schools in Lancaster County, PA since 2007.

Over the first six years of the grant program, we did not receive one request from a school to provide them with a batch of ukes. But in 2012 we began to notice the beginning of a trend, where we would receive at least two and sometimes three requests from schools to provide them with 20 – 25 ukuleles to start a program. I have to admit that I was a bit skeptical but in conversations with teachers it became quite clear that the ukulele may very well be the introductory instrument of the future for young children. The more I found out about it and began to experiment with one myself, it became very apparent.

First, it is small for small hands. Kids have trouble with larger instruments like a full sized guitar, saxophone or viola. Many instruments are simply too big and bulky for young children. Second is that you can begin playing songs on a uke almost immediately as there are only four strings and you can form and play many chords by playing (fingering) only one string.  The faster you can get children to feel that they are producing real music not only by themselves, but to be able to play music with other players, the better. The more excited they will get about playing music.  The uke is excellent for achieve that goal.

Don’t believe me? Think back to those recorders or the screeching sounds that a beginner saxophonist or violinist produce when learning the instrument. Immediate, positive gratification and connection to the instrument, the music and fellow players is key in sparking a child’s interest in continuing to play music. This is why teachers love them as an introductory instrument.

And they are inexpensive. While you can spend over $500 for a high-end model a decent uke for beginners costs around $100. Other than a choral group or a percussion ensemble, the cost of providing 20 – 25 instruments to start a full string program or brass ensemble is prohibitive, particularly in these days of tightening budgets for music and art programs.

And not only are we receiving requests from schools for ukes, we are also beginning to receive them from community recreation programs and senior centers to start groups for senior. To get a sense of their potential impact on seniors, check out this recently released Music For Everyone video.

The segment on our Ukulele Uprising begins at the 1.50 mark.

Finally, there is the sheer fun of it as Jake Shimabukuro explains, “There’s something about the ukulele that just makes you smile. It makes you let your guard down. It brings out the child in all of us.”

And in these times, we can all benefit from embracing our inner child.

So, long live the uke!  The instrument of the future. And, as we all tip toe through the tulips, we should pay our respects to Tiny Tim, an American Musical Visionary.